What Are Peptides and How Can They Benefit Your Skin?

Home/New York Dermatologist, Skin Care/What Are Peptides and How Can They Benefit Your Skin?
Previous Next

What Are Peptides and How Can They Benefit Your Skin?

A plethora of anti-aging products exist that promote the use of peptides to minimize fine lines and wrinkles. Peptides became the center of attention in the skincare industry after research presented at the 2002 American Academy of Dermatology research conference demonstrated that peptides could firm skin and stimulate collagen production. But what exactly is a peptide? And are peptides really beneficial to the skin or are they just another hyped up beauty ingredient? Keep reading to learn what research has found about how peptides can benefit the skin!

Simply put, peptides are short chains of amino acids. When two amino acids are joined together by a single bond it is called a dipeptide. Three linked amino acids are a tripeptide, followed by tetrapeptides, etc. The feature that distinguishes peptides from proteins is their size: peptides typically contain approximately 50 or fewer amino acids, whereas proteins consist of one or more polypeptides (a long peptide chain). 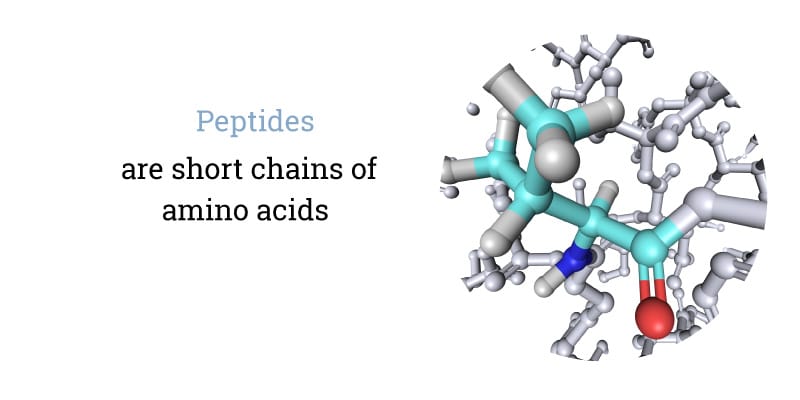 Peptides can either be naturally occurring or synthetically made. For example, the milk protein casein is broken down into two naturally occurring peptides during digestion. On the other hand, a popular synthetic peptide is Matrixyl, or palmitoyl pentapeptide-3, which was developed by the cosmetic chemical manufacturer Sederma and is used by various skincare companies.

As mentioned above, certain peptides are used in anti-aging skincare products due to their ability to increase collagen production, thereby reducing the appearance of fine lines and wrinkles. Many clinical studies have proven this to be true, yet the mechanism(s) by which peptides accomplish this is still unclear.

There has been controversy over whether peptides actually work in skincare products because their size breaks the 500 Dalton Rule. This rule states that for a substance to be absorbed into the skin, its molecular weight (MW) must be under 500 Daltons. (Exp Dermatol. 2000) So if peptides are larger than 500 Daltons, how can peptides be efficacious when applied topically?

One way that peptides work without needing to penetrate the skin is through signaling. Cells have the ability to communicate with each other to coordinate certain actions. For example, if you get a paper cut, a cell-signaling cascade is triggered to begin the tissue repair process. Peptides can mimic certain cell-signaling processes. Specifically, peptides incorporated into skincare products mimic the same peptides that you’d find when collagen is broken down. Research from the National Institutes of Health (NIH) has shown that as collagen deteriorates due to age and environmental factors, it produces peptides that signal skin cells to generate more collagen. By mimicking these naturally occurring peptides, synthetic peptides in skincare products cause your skin to “think” collagen is deteriorating and therefore it needs to produce new collagen. Being able to mimic cell-signaling is one way that peptides can overcome the 500 Dalton rule; even though they don’t penetrate the skin barrier, they still work effectively.

Peptides proven to benefit the skin The most commonly used peptide in skin care is palmitoyl pentapeptide-3. This peptide has been extensively studied for its ability to stimulate new production of types I and II collagen and fibronectin, all of which are important for the firmness and elasticity of the skin. A double-blind, placebo-controlled, split-face, randomized clinical study published in the International Journal of Cosmetic Science observed the effects of topically applied palmitoyl pentapeptide-3 over a 12-week period. Researchers found that this peptide could significantly improve the appearance of fine lines and wrinkles, as well as overall moisturization levels, compared to a placebo.

Another peptide that can benefit the skin is palmitoyl tetrapeptide-7. According to a 2017 publication in Cosmetics, this peptide serves as an anti-inflammatory after exposure to UVB-irradiation. The article cites a study in which 60 healthy photoaged volunteers (aged 45–80) were tested over 12 months with a formulation containing palmitoyl tetrapeptide-7 and another active ingredient. It was found that the appearance of facial wrinkles was reduced by this long-term use.